We were apprehensive of choosing the Horizonte after some of these reviews but we enjoyed it - though we could see why others didn't.

At just £182 for seven nights inc breakfast in a standard room it exceeded expectations - it was clean, the staff were friendly, and the location suited us.

The walls were thin but the room was large and comfortable with a good bathroom and strong shower. We had a lovely port view from the balcony with birds in the pine tree outside our window.

The internet in reception was good value at €2 an hour, though they had problems a couple of times.

The breakfast eggs, sausage, bacon and beans were never really hot, but there was a good cold choice with cheese, meats, salads, breads, cakes, yoghurts and cereals.

The bar drinks were reasonably priced but when we were there on a cold January there were mainly men smoking and watching football. I complained that my Sangria tasted 'off' but the barman refused to replace it. The Catalonia Majorica just down the hill was much friendlier. It's probably much better normally, though.

The hotel is above the Carrefour Porta Pi shopping complex. We spent a few evenings around there because it was too cold and wet to go far. Good choice of restaurants though not much for veggies (loved the pizza).

We mainly used the regular, cheap buses plus a few cabs (to the disappointing flea market; to get our cases up and down that hill, combined with the airport bus; also to the bus station).

We enjoyed strolling back from town along the front a couple of times, and also walked back from Bellver Castle, which has great views over the city, but if you don't like walking the cabs are cheap.

Palma is a lovely city with loads to do in the winter and the Horizonte is a good budget base to see it from.

This TripAdvisor Member:
Liked: the location and the view
Disliked: that hill! 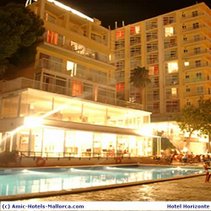 Enjoy the best beaches in Majorca